Fancher’s interest in flying was spurred quite accidentally. At ten years old, he hopped into the backseat of a small Cessna during a cousin’s flight lesson while the cousin learned how to perform steep turns in the plane. Instead of being terrified- the likely reaction of most people in this situation- Fancher said the experience caused him to fall in love with aviation.

Throughout his career, Fancher sold many “goofy” products, navigating through different sales and marketing positions. “I just love building solutions for clients,” he explained.

He worked through the ranks selling paint brushes and roller covers, even selling $40M a year of the products to Walmart. He operated in various positions at companies like Valspar Paints, Rubbermaid, and Moen, logging a lot of time on the road but soaking up business development knowledge as he chugged along. He even served as Vice President of Marketing for a tech firm and then ran his own consulting business, which he eventually sold off.

Throughout this portion of his life, Fancher still dabbled in aviation- he obtained his private pilot license in 1991- but often was pulled away by his career.

One day, he inadvertently stumbled across a jet company in the Twin Cities. Ever persistent, Fancher communicated with the business’s owner for over a year and a half, eventually running the sales team for the company. After staying with the jet business for close to four years, Fancher struck out on his own with his first company Private Jet Solutions, providing private jet chartering, ownership, acquisition, and management services.

For Fancher, the Private Jet Solutions business evolved organically. He started out brokering private jet trips for customers and made his first jet purchase after a request from a client. The jet management solution flowed naturally after that.

“It certainly wasn’t, hey I’ve got this really well thought out plan and I just executed it flawlessly,” Fancher said. “I think it’s just being aware and keeping your eyes open and staying away from deals that are tempting and are probably bad. And then picking the spots that are really the right places to try and grow your business, where you can make money and be with the right client base.”

This mindset flavors business development at Great Planes Aviation as well. Fancher originally thought he would just try out the concept of a flight school in Rochester, not anticipating much of a market. He purchased a small aircraft to train students in, laughing with his wife that in the worst-case scenario, they would have a plane to fly.

“Now she’s laughing saying, ‘You couldn’t even fly it if you wanted because it’s so busy!’”

Interest in Fancher’s flight school has taken off. Currently, the school has twenty-four active pupils; three more aircraft have been added by Great Planes Aviation or by the students themselves to support training efforts.

“It’s going crazy. It’s doing way more than I ever thought it would do,” laughed Fancher.

Great Planes Aviation also provides a charter service, where Fancher functions as a broker and agent of the customer, contracts the appropriately-sized aircraft for the client from a trusted vendor, provides catering services or flight staff, and can even arrange for car service at the final destination.

Always looking for opportunity in the market, Fancher is developing an aircraft maintenance service as well through Great Planes Aviation to support general aviation and commercial airlines. Currently, no maintenance capabilities exist in Rochester. Even if something simple turns up during a routine walk-around, it can take three to four hours for a technician to arrive to service the aircraft.

Fancher also hopes to create an avionic shop through the business, providing service for aircraft radios and navigation equipment.

“We’re here. We’re going to keep our eyes wide open and we’re going to try to figure out where the next right fits are,” Fancher explained.

But what it does save on is time. 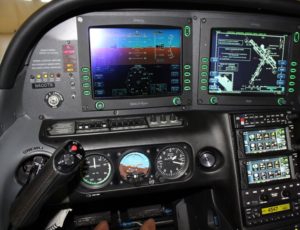 “Commercial airlines serve about five hundred airports in the United States. [In general aviation], we have access to just over five thousand. In general, when we’re taking somebody to a meeting, we’re usually within twelve to fifteen minutes of where they’re going,” Fancher explained.

This service is especially useful when doing business in non-hub markets. These private aircraft are like flying offices, equip with Wi-Fi, television, and even fax capabilities. A business can fly an entire team to a meeting, have face-to-face interactions with the customer, fly to three other meetings and do the same thing, and still be back in Rochester in time for dinner.

As more businesses pop up in Rochester to support the community’s needs and an increasing workforce is drawn to the city, Fancher says that general aviation will be necessary for people to expand their reach and do business while living here.

“And we’re positioning ourselves to try and support that,” he affirmed.

Now, Fancher and his team of four at Great Planes Aviation are exploring the depth and direction of their market in Rochester and placing their clients first, all while getting to perform a job that, to them, is more like a hobby.

“Nobody is having more fun than we are doing this,” Fancher said. “This is a blast. It’s so much fun to be around aviation.”

There is much to like about the new aviation pilot program introduced last week by Rochester Community & Technical College. ...
Start Reading